The equine limb contains several tendons and even more ligaments.  Tendons attach muscles to bones, while ligaments attach bones to bones.  Tendons are often named for their function.  For example the superficial digital flexor tendon runs along the back of the limb extending from the knee to where it attaches on the pastern bones.  It has many functions, but one of them is to flex the lower limb.  Hence the name “flexor” tendon.  The extensor tendons are on the front of the limb and they extend the limb.  The suspensory ligament is one of the most important ligaments in the limb.  It extends from the back of the knee or hock to the sesamoid bones, which are located in the back of the fetlock joint.  Many ligaments are quite short, such as the collateral ligaments, which act to help stabilize almost every joint.

Tendons and ligaments are complex structures.  They are made up of thousands of complex molecules called collagen fibrils. The collage fibrils are connected to other fibrils to make a collagen fiber.  Fibers are bound together to make a fascicle.  Small fascicles are bound together to make ever-larger groups of fascicles until you have created a tendon.  This very structured internal organization system is what gives a tendon its unique strength and function1.  Collagen is the most common molecule in tendons, but they also contain other molecules such as proteoglycans.  The collagen and these other molecules make up the scaffold of the tendon.  Within this scaffold live three different types of tenocytes or tendon cells.  Tendons also contain a large amount of water.  Seventy percent of the weight of a tendon is water1,3.  Most of a tendon’s ability to stretch comes from sliding of fascicles (remember these are bundles of collagen and tendon cells) past one another.  A small amount of a tendon’s ability to stretch comes from the collagen molecules themselves stretching. The course of a tendon is not always straight.  Think of the deep digital flexor tendon which starts just behind the knee and then most make its way around the back of the fetlock before attaching to the foot.  When tendons must cross a boney prominence such a joint they are usually encased within a tendon sheath.  The tendon sheath contains synovial fluid, which is almost identical to the fluid contained within joints.  This helps ease friction as the tendon slides over the bone point or over a joint.  The digital flexor tendon sheath on the back of the fetlock joint helps ease the passage of the deep digital flexor tendon past the fetlock joint.

Tendons and ligaments have a variety of functions.  They transmit forces to enable movement, support the lower limb, store energy, and provide support to joints.  Tendons are viscoelastic, meaning that they have different material properties as different forces are applied to them.  To translate the sentence to English – the same amount of force does not always result in the same amount of tendon stretch.  As force is first applied to a tendon it stretches quite a bit as the fascicles themselves stretch out.  As more force is applied to the tendon, the fascicles start to slide past each other and the amount of stretch per unit of force is less than it was initially.   Thus the tendon is stiffer.  This predictable relationship of increased force resulting in increased tendon stretch occurs until the load becomes too great and the tendon structures start to break down.  This is called the yield point.  Once this occurs there is irreparable damage done to the tendon and a tendon injury occurs1.3. 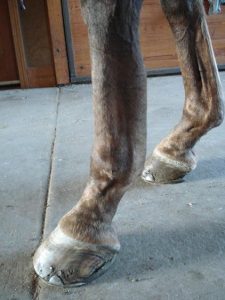 There are two main types of tendon and ligament injuries; external injuries and overstrain injuries.  External injuries include kicks, overreaching injuries, and lacerations.  Overstrain injuries occur in two main ways.  One is a sudden large overload of a tendon that was previously normal.  The second type of injury is more common.  With this type of injury there is a chronic, gradual build up of tendon degradation or microtrauma.  This damage builds up silently with no outward signs until the damage is too much and the tendon suddenly fails resulting in a significant injury.

Tendon and ligament injuries result in disruption of the highly organized internal organization of these structures.  Initially there is hemorrhage or bleeding within the tendon or ligament. This is followed by a period of significant inflammation.  Blood flow increases to the area, edema or swelling occurs, and white blood cells congregate in the injury site.  You see this externally as an enlarged, hot, and painful tendon or ligament.  This is the first stage of tendon or ligament repair and is designed to remove dead tendon fibers and cells, however the inflammation can get out of hand and result in even more damage.  Treatment during this phase is directed at reducing the inflammation by doing things such as icing or cold hosing or administering anti-inflammatory drugs such as phenylbutazone.  The inflammatory phase is short, lasting several days and overlaps with the next stage of tendon healing, which is the reparative phase.  During this phase, new tissue is laid down within the tendon.  This scar tissue has a different composition than normal tendon tissue.  One of the largest differences is the type of collagen (remember collagen is what makes up the bulk of the tendon or ligament).  Normal uninjured tendon has a predominance of Type I collagen.  The new tissue laid down after an injury has a predominance of Type III collagen and is essentially scar tendon tissue4.  These different collagens have different structural properties meaning that the new tendon is not a strong as the old tendon.   Just like a scar on your skin is not as strong as the normal skin, scar tendon is not as strong as normal tendon. The next phase of tendon healing, the remodeling phase, can last up to 18 months after injury.  During this phase, the amount of Type I collagen gradually increases, but never returns to its original concentration.   The body is able to repair the injury, but the scar tissue is never the same as the original tendon tissue4.  It is stiffer than normal tendon (does not stretch as much when loaded) and is more prone to re-injury1.  The transition zones between normal and scar tendon tissue are other areas that are prone to subsequent injury.  Despite the fact that the scar tendon tissue will never be the same as the uninjured tendon, it is possible to optimize the type of scar tissue developed with careful management of the types and amounts of forces applied to the tendon or ligament during the healing phase.  This is why working with you veterinarian to develop and carry out a carefully planned rehabilitation program of rest with gradually increasing controlled exercise is so important to tendon and ligament healing.

Healthy tendons and ligaments are extremely important to the performance of our equine athletes.  Injury of these structures is a significant cause of lameness in horses.  As we gain a better understanding of the structure and function of these tissues, we are better able to treat and hopefully prevent injuries.   Stay tuned for a follow up article focused on treatments of tendon and ligament injuries.