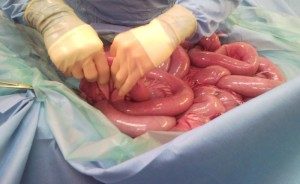 We will continue our series of articles on colic by discussing causes of colic that occur in the small intestine. 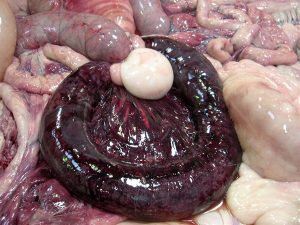 The epiploic foramen is a small opening within the upper abdominal cavity located between some of the horse’s largest blood vessels, the vena cava and the portal vein, and the liver1.  Small intestine usually does not move into this small space, but if it does happen to go into this narrow tunnel, it gets stuck (also known as entrapped) and is unable to move out.  Eventually compression within this small space cuts off the blood supply to the affected small intestine and it dies.  Treatment involves surgery where the surgeon gently frees the entrapped or stuck small intestine (remember it is stuck between some really big blood vessels!), removes the dead small intestine, and reconnects the remaining healthy sections.   This type of colic has been associated with horses that crib2. 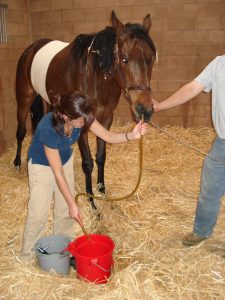 Ileal impactions occur when partially digested hay builds up in the ileum creating a blockage.  The ileum is the last section of small intestine before the cecum.  Ileal impactions most commonly occur in horses eating Coastal Bermuda grass hay, which is not grown in the Pacific Northwest.  Ileal impactions can also occur in horses with tapeworm infestations3.  Tapeworms attach at the junction of the ileum and cecum and a large infestation can interfere with proper empting of the ileum into the cecum and can result in the development of an ileal impaction.  Many ileal impactions can be resolved with hospitalization, medications to relax the small intestine and control pain, and IV fluid therapy.  Some horses require surgery to have the impaction manually broken down and milked into the cecum.  Tapeworm infestations can be difficult to identify with fecal tests, so all horses should be dewormed once a year with praziquantal, the only deworming medication that kills tapeworms.

Ascarids are worms that live in the small intestine.  Adult horses develop a good immunity against ascarids.  As a result they are rarely found in normal horses over a year of age, they are however a problem in foals.  Ascarid impactions typically occur when weanlings that have had minimal parasite control are dewormed. These young horses have developed a large parasite load and deworming them results in widespread die off of the worms.  Masses of dead worms then block and impact the small intestine.   These impactions often require surgery to resolve.  Unfortunately prognosis from surgery for ascarid impactions is often lower than that for other small intestinal surgeries4.  Prevention of ascarid impactions involves routine deworming of young horses.  If a foal’s parasite control therapy has not been optimal, it is important to consult a veterinarian before starting a deworming program as multiple low doses of dewormers may be needed to prevent a massive die off and the development of an impaction.